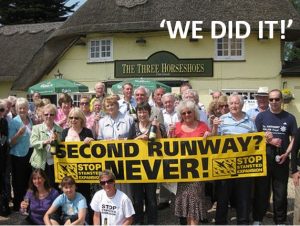 Sunday 24 May will mark exactly ten years since BAA formally abandoned its plans for a second runway at Stansted Airport. This was the culmination of an eight-year campaign by Stop Stansted Expansion (SSE) challenging BAA at every turn.

A second Stansted runway lay at the heart of a 2003 Government White Paper, confirming proposals that had first been put forward the previous year to make Stansted bigger than Heathrow. These proposals had shocked the local community, leading to the establishment of SSE in August 2002.

By the time BAA finally conceded defeat and withdrew its second runway plans for Stansted, it had spent some £200 million on consultants, design and other preparatory work, including buying up land and houses which would need to be demolished to make way for the expansion of the airport.

The £200 million wasted by BAA was just a fraction of the cost to local residents in terms of the property blight which had plagued the local area for eight years, significantly reducing the value of people’s homes and disrupting long established communities.

Many assumed that when the second runway plans were abandoned, the local community could finally relax but within three years (November 2012) the Government set up the Airports Commission to look afresh at the issue of airport capacity in the South East. Again Stansted was in the firing line and again SSE was forced to work at full throttle, making 12 submissions, giving oral evidence and taking legal action to stave off the threat. The Commission’s final report in July 2015 confirmed that it favoured expansion at Heathrow, with Gatwick as the alternative, and Stansted was spared the threat of a new runway.

But Stansted did not escape entirely. On 2 June 2017, its new owners, the Manchester Airports Group (MAG), served notice of its intention to seek planning approval for major expansion based on the existing runway. If approved it would allow the airport to grow by 15 million passengers a year (a 54% increase compared to last year), and an additional 75,000 flights a year (a 38% increase).

Uttlesford District Council (UDC) refused MAG’s application on 24 January 2020 but MAG is allowed six months (until 24 July) to appeal and has indicated that it might do so.

An appeal would trigger a Public Inquiry which would mean that the final outcome might not be known for another 18 months. Meanwhile UDC has considered it necessary to set aside £1.7 million to cover the potential costs, allowing for the risk of being forced to pay MAG’s costs if its appeal were to be successful.

SSE has repeatedly called upon MAG to respect the UDC decision by announcing that it will not appeal and withdrawing its planning application. Ending the uncertainty would allow UDC to release the £1.7 million currently held in reserve and put these funds to better use during the current Covid-19 crisis.

SSE Chairman Peter Sanders commented: “Ten years ago BAA was gracious enough to concede defeat. MAG would do well to be equally magnanimous. It’s pointless for MAG to continue with its current planning application and it’s quite wrong to prolong the uncertainty in these difficult times.”