A number of reasons have been suggested for Stansted’s decline over the seven months including the non delivery of Boeing 737 Max aircraft to Ryanair, the collapse of Thomas Cook and now also the Coronavirus. 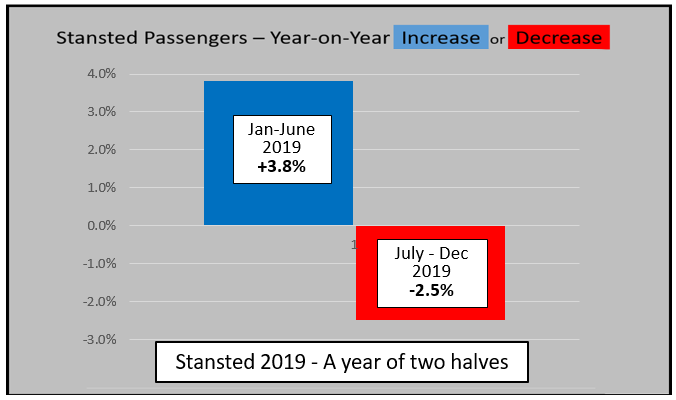 These figures are all the more surprising in view of the many new routes which Stansted has announced in recent months, suggesting that many of its well-established routes have declined quite sharply.

Stansted’s cargo business also continues to be in decline with the tonnage carried in January down by 20.2% compared to the same month last year. This follows a 9.6% decline in cargo tonnage in 2019.

Peter Sanders continued: “Stansted’s owners, the Manchester Airports Group (MAG), has always insisted that its planning application should be decided locally by Uttlesford District Council (UDC) rather than nationally. MAG should therefore respect the UDC decision of 24 January to refuse the application, noting that the vote of the cross-party Planning Committee was a resounding 10 v 0.”

Peter Sanders concluded: “Despite a large proportion of its shares being held in an offshore tax haven, MAG is a major UK plc and that privilege brings with it certain corporate and social responsibilities. Accordingly, instead of prolonging the uncertainty, MAG should make clear that it will not appeal against the UDC decision to refuse planning consent for further expansion of Stansted Airport. The local community is entitled to some long term peace of mind.”