Stansted airport goes off the boil

After 63 consecutive months of year-on-year growth, Stansted Airport has posted a reduction in passenger numbers in each of the past three months. Passenger numbers were down 0.5% in July, down 3.7% in August and down 2.7% in September. The overall reduction over the three month period was some 200,000 passengers, equivalent to a year on year decline of 2.3%. [Note 1]

It is understood that part of the reason for Stansted’s decline in recent months is the non delivery of new Boeing 737 Max aircraft to Ryanair. All Boeing 737 Max aircraft have been grounded since March following two fatal crashes. It is not yet known when (or if) these safety problems can be satisfactorily resolved to allow Boeing to recommence aircraft production and deliveries to Ryanair, which accounts for four out of every five passengers at Stansted.

Stansted’s passenger numbers are also expected to be down in October, partly due to the collapse of Thomas Cook at the end of September. Stansted’s cargo business is also substantially down with a loss of 28,000 tonnes (11%) on a year-on-year basis, with the result that the number of cargo aircraft using Stansted is down 6% compared to last year.

SSE Chairman Peter Sanders commented: “These latest Stansted Airport traffic figures, showing declines across the board in passenger numbers, flights and cargo activities, demonstrate the nonsense of ‘Project Fear’ whereby Stansted Airport and some local business leaders were seeking to panic Uttlesford District Council into a hasty approval of the airport’s expansion plans. There is no question of growth being stifled.”

Peter Sanders continued: “We have consistently pointed out the Stansted Airport Planning Application for 43 million passengers a year (54% more than in 2018) was premature. There is absolutely no rush for any decision. At the very least, Uttlesford District Council should do nothing until we all know the outcome of SSE’s legal challenge in the High Court, which takes place from 12th-14th November.” 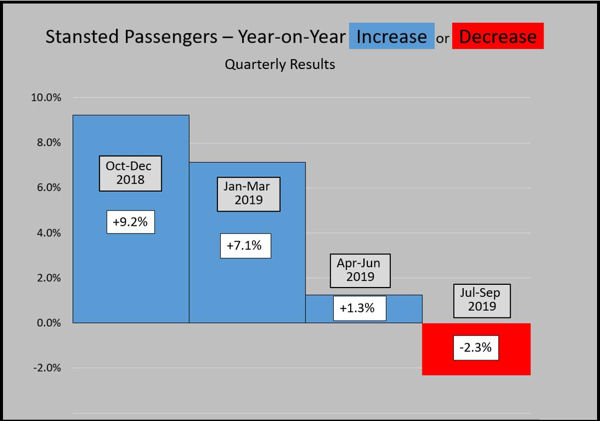 Note 2: Luton, Heathrow and Gatwick traffic figures are not yet available from the CAA for September 2019 which is the reason for using the three month period from 1st June to 31st August.