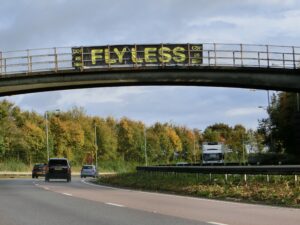 To coincide with the start of the crucially-important COP26 international climate change summit in Glasgow, Stansted Airport Watch (‘SAW’) is launching its “Fly Less” campaign. [Note 1]

Aviation currently accounts for around 9.4% of UK carbon dioxide (CO2) emissions and on present trends could be the largest single source of UK CO2 emissions by 2050.  [Note 2]

The difficulty of decarbonising air travel is widely acknowledged and, whilst technological solutions such as electric aircraft might one day be possible, there is no realistic prospect of a technology ‘fix’ on any meaningful commercial scale until at least the 2040s.  Meanwhile, climate change is a ‘here and now’ issue and urgent action is necessary if we are to avoid irreversible damage.

The Government’s independent Climate Change Committee has called for a slowdown in the level of air travel and a freeze on UK airport expansion until the aviation sector can show a significant reduction in its CO2 emissions. To date, the Government has rejected this call and is putting its faith in technological solutions, at least for the time being.

There is, however, an added problem because aviation emissions have a warming impact far in excess of that caused by the CO2 alone. The impact of non-CO2 aircraft emissions at high altitudes, caused by warming pollutants such as nitrogen and sulphur oxides, aerosols and water vapour, is estimated to be between two and four times higher than for CO2 emissions alone. [Note 3]

SAW’s ‘Fly Less’ campaign will be publicised on the SAW website and social media, supported by posters, banners and car window stickers. In addition, SAW will be writing to the chairmen of the FTSE top 100 UK companies, encouraging businesses to play their part by reducing business flights and so helping to combat climate change.  First Class and Business Class flights have a far higher carbon footprint compared to economy class, and private business jets are estimated to be up to ten times more damaging, in terms of emissions per passenger kilometre.

SAW Chairman, Brian Ross, commented: “This is not about telling people that they must not fly or that they cannot have a well-deserved annual family holiday. This is about asking people to try to reduce their carbon footprint. The train can often be a realistic alternative to a domestic flight and a Zoom meeting can often avoid the need for a business flight. It doesn’t require a huge change in lifestyle to make a meaningful reduction in your carbon footprint.”

(i)   Direct emission of substances which have a Radiative Forcing (‘RF’) effect (e.g. CO2);
(ii)  Emissions that produce or destroy radiatively active substances (e.g. NOx); and
(iii) Emissions that cause aerosol particles and contrails.

The Intergovernmental Panel on Climate Change (‘IPCC’) has estimated the RF effect for aircraft emissions at between two and four times the effect of the CO2 alone. See
https://archive.ipcc.ch/pdf/special-reports/spm/av-en.pdf, section 4.8, page 9.

The ‘Policymaker Summary’ in the same IPCC report showed the atmospheric lifetime of CO2 to be “between 50 and 200 years”, with a footnote pointing out that “the way in which CO2 is absorbed in the ocean and biosphere is not simple and a single value cannot be given…”.  See also the recent report (25 October 2021) from the UN World Meteorological Organization at: https://public.wmo.int/en/media/press-release/greenhouse-gas-bulletin-another-year-another-record 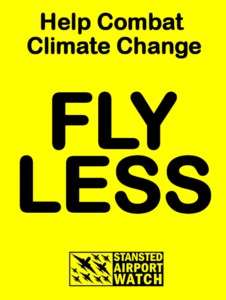