One of the key agreements at the COP26 climate change summit currently taking place in Glasgow is a commitment to stop global deforestation by 2030 and then begin to replenish the world’s tree cover. We all need to play our part and so today (6 November 2021) volunteers from Stansted Airport Watch began planting more trees to increase the size of the ‘SSE Wood’, near Broxted Hill. [Note 1] 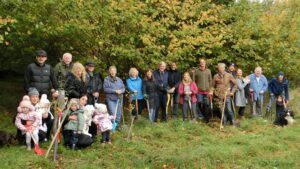 The SSE Wood was first established in 2004 on the site then proposed for a second runway.  Terry Waite CBE, planted the first tree and another 500 trees have since been planted including maple, oak, hornbeam, hazel, hawthorn, blackthorn, beech and ash.  The threat of a second runway has receded but it has been replaced by the existential threat posed by climate change and, once again, trees may come to our rescue.

As well as increasing the size of the SSE Wood, Stansted Airport Watch is calling upon its 7,500 members and registered on-line supporters to support its tree-planting initiative and to ‘Dig for Victory’ by planting a tree in their own garden, allotment or other plot of ground to help win the war against climate change.

The original ‘Dig for Victory’ campaign was set up by the UK Government during World War II to encourage men and women across the country to assist in the war effort by growing their own food in times of harsh rationing. The current climate emergency requires the same rallying call.

The global climate emergency will not be solved by governments alone, especially when the aviation industry continues to add to the problem. UK aviation was responsible for emissions of 38.5 million tonnes of carbon dioxide (CO2) in 2019 and this is expected to carry on increasing for another ten years, and still to be more than 30 million tonnes in 2040. [Note 2]

Stansted Airport Watch adviser on climate change issues, Mike Young, commented:  “You don’t need to be a tree-hugger to help combat climate change. Trees can make a difference and if you have a garden, you can hopefully find room for at least one extra tree, whether it be large or small. Even a small tree in a pot can make a difference. That’s surely not too much to ask to help protect the future of your children and your children’s children.”